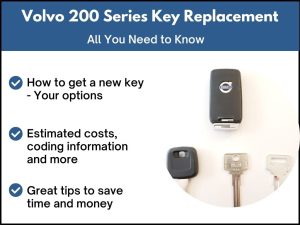 The information provided here is relevant for the following models:

Have you lost your Volvo 200 Series car keys? – How do I get a replacement key? What options do I have?

Volvo 200 Series keys replacement by year – find what of key you had: a regular, transponder chip or remote key fob 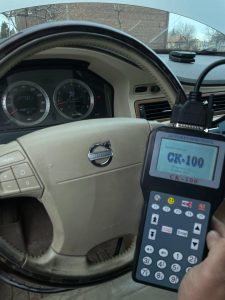 What is the cost of getting a replacement Volvo 200 Series key?

Volvo 200 Series key programming – which keys you can program yourself? how to program your key & more 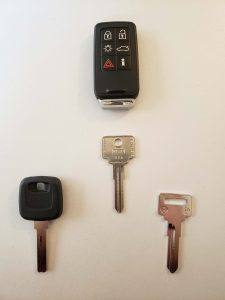 Can I use my insurance coverage to pay for my Volvo 200 Series key replacement? – Useful information that can help you save money! 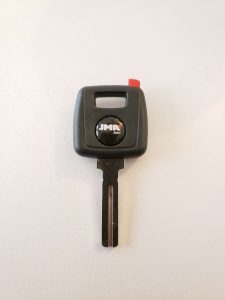 Most Volvo, as well as other high-end vehicles made in the US and abroad after 2015 are equipped with high-security key features, which only some locksmiths can cut and program as most automotive locksmiths don’t carry the necessary equipment to make a replacement key and/or program the key. Therefore, before calling for service, make sure you provide the VIN so the locksmiths can check if they can cut you a replacement key.

In addition, some key blanks may not be available here for certain years. If this is the case, most chances are the dealer is your only option, as there are no aftermarket keys and/or no available coding machine for locksmiths to cut and program this key. 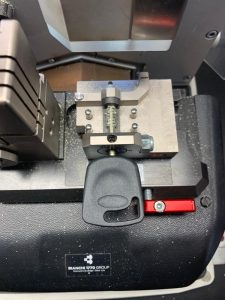 We will keep updating the keys for high-security models as they come available in the market but as always, we highly recommend you double-check the information before making a decision. 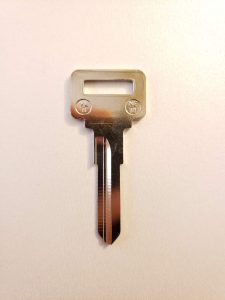 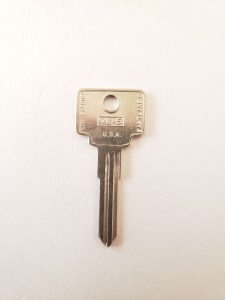 I lost my Volvo 200 Series car key, have no spare, and need a replacement. How and where can I get a replacement key? 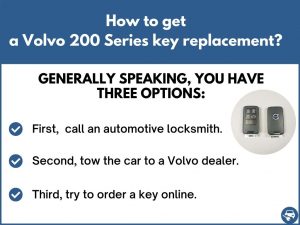 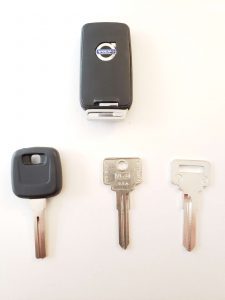 Click here to see this model types of keys or choose by year to get more accurate information and options.

For a more detailed explanation including tips on how to SAVE TIME AND MONEY please visit our blog post: How to get a replacement key

What should I tell the locksmith or dealer when I call for the service? 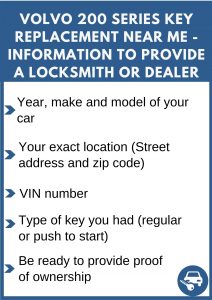 In addition, write down the VIN (Vehicle Identification Number) of the car located on the left side of the dashboard near the mirror. (Click here for more information). That would help the locksmith or dealer verifying the year, make and model of the car and the type of key you had. 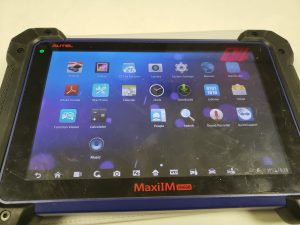 In addition, ask if you can come and pick up the key or the car has to be present. With older models, codes may not be available and therefore on-site service will be required to make a new key.

Finally, make sure you can show ownership of the car by having the necessary documents. The title, ID, insurance card, etc.

Not ready to call for service just yet?

Take a look at this blog post on how to find your lost Volvo 200 Series keys. 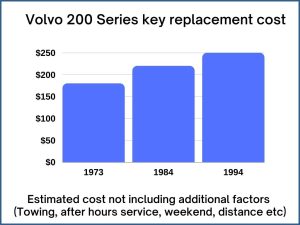 The answer below is a short explanation. For a more detailed explanation and GREAT TIPS on how to save money, please visit our blog post: Car keys replacement cost 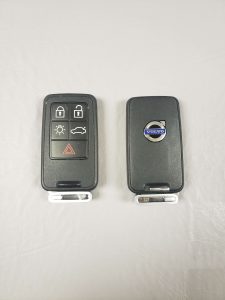 The type of key you had and the year the car was manufactured are maybe the most important factors (chip, intelligent fob, “push to start”, remote, regular “non-transponder” key). The newer the car is, the better security features the key had and therefore you can expect to pay more than $450 for a replacement key. Click here to see this model type of key you had for a more accurate price and information.

In addition, it depends on where you get a key replacement. The dealer, automotive locksmith or get it online.

Because most locksmiths don’t carry the necessary equipment and keys to make Volvo keys, the dealer might be your only option and they charge accordingly. In addition, most chances you will have to tow the car there to program the new key or remote and therefore the total price is even higher. 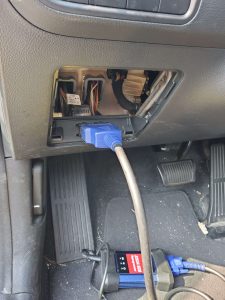 Furthermore, consider that if you are looking to have a locksmith come out and make you a new key outside regular business hours, the price may go up as well.

Volvo 200 Series key programming – Which keys you can program yourself, which keys require programming tool & more

Volvo has different types of keys. Some require programming and some don’t. All transponder chip keys and/or smart key fobs need to be programmed with a special programming tool that only an automotive locksmith or the dealer has. There is no need to program non-transponder metal keys.

To make things simple we divided all Volvo keys into 2 categories:

Volvo 200 Series non-transponder keys are metal keys that have no chip in them and therefore no programming is needed:

Volvo 200 Series keys that need to be programmed and you will need an automotive locksmith or the dealer:

These keys, also known as remote smart keys, intelligent keys, or key fobs, as well as transponder keys, have a security chip in them, and programming is needed. In addition, a special machine is needed to program them and therefore an automotive locksmith or dealer should do it for you.

None – All Volvo 200 Series keys do not need to be coded/programmed.